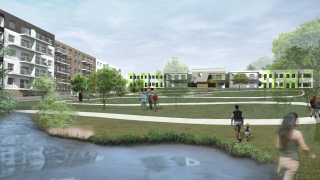 PJ Planning have recently secured Planning Permission for a number of high quality developments throughout the UK, working with a variety of clients to great success. We’ve also represented South Staffordshire Council to successfully defend an appeal made to the Secretary of State, which has become a landmark case in the interpretation and usage of vital parts of the NPPF.

Below you’ll find a summary of some of these projects. Should you wish to find out more information, or would like to discuss using our services please do not hesitate to contact us.

PJ Planning, Representing South Staffordshire Council as their expert planning witness, provided a robust and detailed defence against an appeal made to the secretary of state by Mr. S. Bowder, for the “change of use of land to allow for siting of up to 89 no. holiday lodges, reception lodge, warden’s static caravan, access road, car parking and ancillary works” at White Sitch Wood, Weston under Lizard. This led to the appeal being dismissed.

There were 5 interlinked issues identified by the Inspector as being central to the appeal, including whether the principle of development was acceptable in the open countryside, the impact of the development on the character and if the presumption in favour of sustainable development, identified in Paragraph 14 of the NPPF should apply.

PJ Planning were able to successfully argue under examination that in order for the presumption to apply, development must first specifically be deemed to be sustainable in line with the three roles outlined in Paragraph 7, rather than simply assumed. As the development as proposed did not meet the three roles of Paragraph 7, it did not represent sustainable development, and therefore no presumption should apply. As the inspector felt that the other issues were not fully satisfied, when considering the planning balance, the appeal was refused.

You can view the full appeal decision notice at this link.

PJ Planning, representing the owners of Aynhoe Park, were successful in having Planning Permission and Listed Building Consent to effect the following

This application dealt with ensuring high quality and sustainable development to a listed building, taking into careful consideration the need to prepare proposals to ensure the long term viability of the house, alongside needing to be considerate of the potential to cause harm to a listed building and its setting. The application was carried out following extensive public consultation, through which the plans were developed to take into account local and stakeholder opinion.

PJ Planning are continuing to represent the Owners of Aynhoe Park through a further planning application to provide three new dwellings, and heritage workshop, and associated parking, as well as new gated access and landscape works. This is due to be determined in February 2014.

PJ Planning, under instruction from Birmingham Property Group Ltd, successfully obtained a CLEUD/CLPUD certificate from Birmingham City Council for the former Edwards Bar and Nightclub, providing the mechanism for the ground floors to be used as a bar/restaurant.

This application required a full historical analysis of the property and its surroundings, which once formed part of a large entertainment district within Central Birmingham. Central to the case was that there were two separately operated units that existed on the site for over 20 years, each with its own planning permission and lawful uses. The supporting statement presented this case in detail and was supplemented by in depth, yet succinct evidence from a variety of sources.

PJ Planning, acting as the planning agents for David Wilson Homes, successfully had planning permission granted for two applications at Station Road, Honeybourne. PJ Planning had previously had planning consent granted on appeal for a development by Sharba Homes, which became a landmark case in the interpretation and calculation of 5 Year Housing Supply.

The first of the two applications sought to change the house types for the development, and was granted consent in December 2013. The second application sought to provide a new scheme altogether, providing 35 houses compared to the previous schemes. As well as preparing the application and Planning Statement, PJ Planning also led the public consultation, and liased directly with the local Parish Council, who led their full support to the scheme. The application was subsequently approved at Planning Committee.