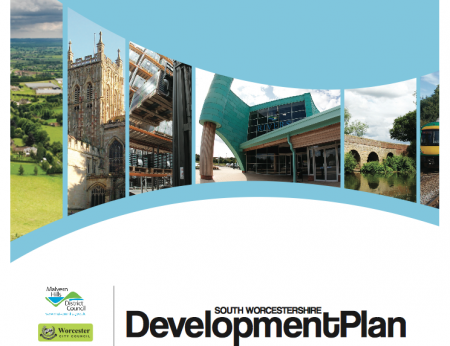 Following the joint submission of the South Worcestershire Development Plan (SWDP) by Malvern Hills District, Worcester City and Wychavon District Councils to the Secretary of State on the 28th May 2013, the first phase of the plan’s examination in public commenced in October 2013. The Inspector appointed by the Secretary of State elected to conduct the examination in two phases, the first being:

“Confined to the consideration of the soundness of the proposed levels of employment, housing and retail provision set out in policy SWDP3, and whether or not the requirements of section 33A of the Planning and Compulsory Purchase Act 2004 in respect of the duty to co-operate were met in the preparation of the Plan.”

On the 30th October 2013, the Inspector issued his interim conclusions as planned on these matters. In the letter attached to his main interim report, the inspector states that his most important finding is that

“The modelling and analysis in the February 2012 SHMA do not provide a reliable basis for identifying the level of housing need in South Worcestershire over the Plan period”,

The conclusions to the discussion of housing need state that this additional work is likely to lead to a housing figure substantially higher than the 23,200 figure identified in the submission document, however the Inspector was not in a position to predict the outcome of any additional work conducted by the three local authorities.

Alongside this, the inspector determined that the allowance of 550 dwellings in the housing supply figures for bringing long-term empty homes back into use were not justified, and requested that this be reviewed. The proposed 4% lapse rate in planning permissions was deemed also not to be justified, and instead the Inspector recommended that this should be set at 5%, based on historical data.

Future Examination of the SWDP

The inspector noted that the submission version of the SWDP would lead to an under delivery of 2000 affordable homes over the plan period, although the work required on assessing overall housing need “would likely lead to an increase in the plan’s overall housing requirement” in turn positively impacting on the potential to deliver a greater amount of affordable housing in the area.

The inspector concludes that as a result of the delays encountered by further work being required by the local authorities, “it is not possible at this point to estimate when the examination will progress to Stage 2”, where the non-housing policies of the SWDP will be examined. This in turn therefore will have a knock on effect on the estimated adoption of the plan, originally timetabled for September 2014,which will likely not occur until 2015.

Impact on current and future Planning Applications within SWDP area

This interim report will likely have a number of impacts across the South Worcestershire Planning area, and the three local authorities that have collectively worked on the SWDP. The most significant is the ability for each local authority to demonstrate a continued 5 year housing supply, and therefore, the reduced weight that may need to be given to specific policies of each local authority’s existing development plan.

Whilst Paragraph 216 of the NPPF states that local authorities may give weight to relevant policies in emerging plans, the fact that significant issues with housing levels and distribution remain, along with the inspector concluding that there are conflicts with national policy, indicate that a very limited degree of weight, if any should be given to these emerging policies. It is worth noting that as the inspector declared employment figures to be sound, a stronger degree of weight can now be afforded to general policies in this area, although, specific policies may still have unresolved objections which will be heard at stage 2 of the examination of the plan.

This announcement also acts as a material consideration that each of the three local authorities and inspectors should take this report into account when determining planning applications. Specifically, any reference to figures within the 2012 SHMA should be reviewed, as it has been demonstrated that these figures as they remain are unsound.

Should you require more information on how this report, the examination of the South Worcestershire Development Plan, or the state of either of the three Local Authorities existing Local Plans may affect your development or local community, please do not hesitate to contact us. We offer a wide variety of planning services, and are happy to discuss how this report may impact you.